Geography Is No Limitation

Hannah Bonham was tired of being sick. For more than six months the young woman had been treated, retreated, and retreated again for an arteriovenous malformation (AVM), to no avail. In fact she’d gotten worse, as one procedure had resulted in a stroke that caused partial paralysis. In short, Hannah was ready for a doctor who could offer a real solution – and that’s when she found Dr. Knopman.

The problem had started in early 2015 with sudden and severe headaches, coupled with nausea, which doctors in Hannah’s home state of South Carolina ascribed to an AVM, an abnormal tangle of blood vessels in her brain. Hannah underwent a minimally invasive procedure to try to embolize the AVM, using a tiny catheter threaded up to her brain from her femoral artery, but doctors gave up when several attempts at the procedure failed. That was followed by a craniotomy - an open surgical procedure that worked, but only temporarily until the AVM reappeared – then another attempt at the minimally invasive embolization. This second attempt caused the stroke, and Hannah found herself in in-patient rehab to recover movement on her left side.

“It altered my life completely,” says Hannah of rehab, “and I was still suffering from severe headaches!” Worst of all, a CT scan showed that the AVM was still present and not cured.

Hannah and her mom, Cathy, decided to look beyond their local hospital and search for experts in cerebrovascular conditions like hers, regardless of location. An Internet search turned up Weill Cornell Medicine Brain and Spine Center in New York, which offered a Cerebrovascular Surgery Service that specializes in AVMs, cavernous malformations, vein of Galen malformations, and other complex disorders of the blood vessels in the brain. Among the experts listed on the web site, they identified Dr. Jared Knopman as the neurosurgeon they wanted to weigh in on Hannah’s treatment options. He had the experience in these rare conditions that gave them confidence in his ability to help them decide what to do.

Using the remote online Second Opinion Service, Hannah uploaded her scans and records so that Dr. Knopman could review her case. He felt that unless her AVM was fully cured, Hannah could be at risk for a potentially catastrophic brain hemorrhage in the future.  Dr. Knopman recommended that Hannah undergo surgery, and told her that he was confident he could repair the problem – but that it would require another craniotomy.

For the first time in many months, Cathy felt hopeful that her daughter was in the right hands. “I was reassured that Hannah would be treated by a surgeon with great knowledge in her long history of cerebrovascular diseases,” she says. Hannah agreed, noting that Dr. Knopman “was calm, and always took into account what I desired as a patient. He did not push treatment, instead listening to me, unlike anyone else. He understood I knew my body best, and gave me control of my treatment."

Hannah admits she was nervous about undergoing surgery again, but she trusted Dr. Knopman to take good care of her. “I felt good in his hands,” she says. “He had my best interest in mind, and he was honest and upfront with what the best option would be.”

The surgery was successful, and Hannah flew back home to recover. She had her stitches removed locally and sent photos of the healing incision back up to New York for Dr. Knopman and his nurse practitioner, Stephanie Paine, to review, saving her family another trip north. Hannah’s long journey was over – the bleed had stopped, and the AVM was cured. 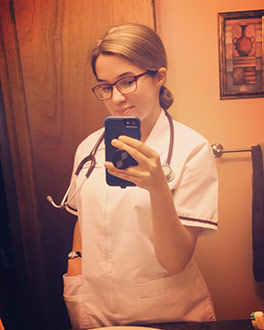 Hannah, on her way to becoming a nurse

Two years later, Hannah is doing well. Now 21, she is attending the University of South Carolina at Aiken to pursue a nursing degree. Except for the occasional mild headache, easily managed with medication, she’s back to normal.

“Hannah's case stands out in our minds as one of the most gratifying cases we've ever had the privilege to treat,” says Stephanie Paine. “It was truly an honor to be able to help her,” Dr. Knopman concurs. “We see a lot of rare cerebrovascular cases in our practice, and we have a top-notch hospital facility here at NewYork-Presbyterian, where we have access to all the latest technology we need to treat patients. It’s a great feeling to be able to send someone back to a healthy, happy life again.”

With the surgeries now behind her, Hannah feels a new wisdom about her condition, and about taking responsibility for her own health. For anyone facing the prospect of surgery, Hannah says, “you have to advocate for yourself and educate yourself on your disease.” She credits her recovery to Dr. Knopman, but also to her own initiative in researching her condition. She made it a point to find a center that had the expertise in the area that mattered most to her, and that made all the difference.

Most importantly, she says, she recommends finding a surgeon like Dr. Knopman, who has not only the surgical skill she needed, but also the ability to listen and care about his patient’s concerns. Geography no longer limits a patient’s ability to find the right expert – Dr. Knopman was just an online search away, and he was exactly the neurosurgeon she needed.