Jelena Katic, a mother of two from Phoenix, Arizona, was concerned when her younger daughter Nela, age 2 1/2, woke up from a nap with a swollen eye. “It was bulging,” Jelena recalls. After a few hours the swelling subsided, but something about her eye still didn’t look right.

Jelena took Nela to the pediatrician, who thought it might be related to allergies, but Jelena sensed it was something more. A few days later, with the swelling getting worse, Jelena returned to the doctor and insisted on further tests. Nela had an MRI, and a few hours later a radiologist approached Jelena and her husband, Dario, with grim news – there was a large mass behind Nela’s eye, pushing it out. “It was surreal,” says Jelena. “Our worst fear had come true.”

Nela was quickly admitted to Phoenix Children’s Hospital, where further tests confirmed the shocking diagnosis – the little girl had orbital rhabdomyosarcoma, a rare and aggressive malignant tumor that threatened her eyesight, and her life. Jelena and Dario were devastated. “It was impossible to grasp what was going on then, and what lay ahead,” Jelena recalls.  “But slowly we realized that we were very lucky that this was discovered early on and was localized.”

Nela’s doctors were reluctant to perform surgery to remove the tumor, because its position so close to the eye made a surgical approach very risky. They recommended using chemotherapy and radiation, treatments that orbital rhabdomyosarcomas can respond well to, in order to shrink the tumor. Glad to have an option other than a dangerous surgery, Jelena and Dario agreed.

The treatment was grueling. Nela underwent six months of chemotherapy and 25 sessions of radiation, and the family found themselves living day by day, even hour by hour. “There were sleepless nights, helpless days, so many uncertainties, and endless fear and anxiety,” says Jelena. “Nela showed us what bravery and determination is. I never thought I could learn and lean on something so small and tiny as I did on my daughter.”

When treatment was finally over, Nela’s eye was back to normal and scans showed no evidence of disease. The family — relieved, happy, and eager for a fresh start — relocated to Laguna Niguel, California, where Jelena and Dario started new jobs. “Nela was doing so great,” says Jelena. “Her hair had grown back, she was gaining weight, and she was excited about starting pre-school. She was the happiest three-year-old ever.”

A month after their move, Jelena took Nela to see a new team of doctors at Children’s Hospital of Orange County for a six-month follow-up scan. The results took her breath away. “The doctor said, ‘it’s back,’ and I honestly didn’t know what that meant,” she recalls. “The word ‘relapse’ was not in my vocabulary. Just like that, reliving the nightmare of cancer treatment had become a reality.”

This time surgery to remove the tumor was Nela’s only hope, and Jelena and Dario started talking to doctors in both California and Arizona about options. Doctors told them that Nela's skull would have to be cut open to reach the tumor, and they also recommended enucleation, or the removal of the affected eye. “Everything was invasive and high risk, and it was a pure torture trying to make a decision,” says Jelena.

Desperate for better options, Jelena and Dario widened their search to include doctors in New York City. They eventually reached out to pediatric oncologist Leonard H. Wexler at Memorial Sloan Kettering Cancer Center, who introduced them to Dr. Theodore Schwartz and Dr. Jeffrey Greenfield across the street at Weill Cornell Medicine and NewYork-Presbyterian. Dr. Schwartz is a worldwide expert in endoscopic surgery to remove orbital tumors, and Dr. Greenfield is a pediatric neurosurgeon who was pioneering use of this procedure in children. “Dr. Schwartz said their less invasive techniques would avoid disfiguring Nela’s face and provide her with the best chance of beating this once and for all,” says Jelena. 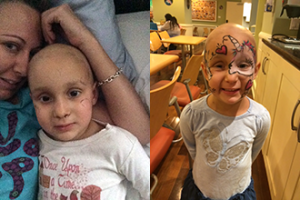 Hopeful, Jelena and Dario packed up Nela and her older sister, Lana, and traveled across the country. As soon as they met the surgical team at Weill Cornell Medicine, they knew they had made the right choice. “There was a sacred trust that we felt right away, and everything Dr. Schwartz and Dr. Greenfield explained was truly the best we could hope for,” says Jelena. “They talked to us, answered all of our questions, and were so kind to Nela and Lana. We were thousands of miles away from home, and yet we felt very comfortable being there.”

The surgeons explained that the procedure was endoscopic and endonasal — meaning that it used a tiny camera and tools inserted through the patient’s nostrils to reach the tumor and remove it without a disfiguring incision. Approaching the tumor this way also meant the surgeons would not have to move the brain out of the way while they worked, reducing the risk of complications. The surgery is tricky, and it can only be done by a few experts in this procedure, but it’s safer than open surgery, with quicker recovery times. Still, the doctors warned Nela’s parents that the tumor was very close to the optic nerve as well as the muscle that controls eye movement; there was a risk that the surgery could affect the child’s ability to move her eye or, in a worst case scenario, cause her to lose sight in that eye. 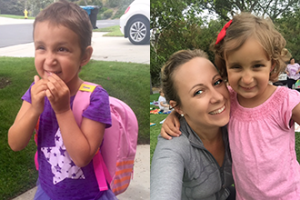 When the day of the surgery arrived, Nela’s terrified parents kissed their daughter as she was put under anesthesia, then met briefly with both Dr. Schwartz and Dr. Greenfield. “Dr. Schwartz told us that he considered Nela as his own child while in the operating room, which put a smile on my face,” Jelena recalls. “I will forever be thankful for that.”

The surgery was a success. During the six-hour procedure, doctors were able to remove the entire tumor and save Nela's optical nerve and muscle. “It's very hard to explain the feeling of relief,” says Jelena. “We were finally able to take a deep breath, relax, and rejoice.”

Jelena and Dario were even more relieved when they visited Nela in the ICU, where they found her groggy but looking fine. “All we saw was gauze in her nose and two marks on her face,” Jelena recalls. “It was unbelievable how great she looked just a few hours after surgery.” Two days later, Nela was released from the hospital. Two days after that, the little girl joined her family for a walk in Central Park.

But Nela wasn’t out of the woods yet. The surgery was followed by eight months of chemotherapy as well as additional radiation to make sure no cancerous cells were left behind. But by January 2015, Jelena and Dario were celebrating Nela’s last chemotherapy treatment, and she’s been in remission ever since. 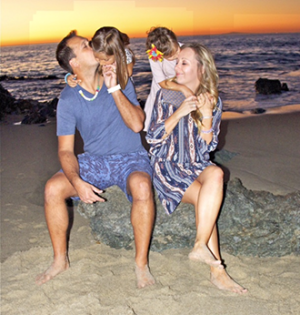 Jelena says going to Weill Cornell Medicine and NewYork-Presbyterian was the best decision they ever made. “New York made me feel strong, fearless, and even powerful,” she says. “And it gave Nela a real fighting chance. She is an extraordinary girl, and our team of doctors gave her a platform to health and success in life.”

While she and Dario don't know what the future holds, they hope it will include doctors Schwartz and Greenfield. “I continue to share Nela's milestones with them,” says Jelena. “I can't wait to send them her high school pictures, college graduation, maybe even a wedding. I know how busy they are, but whenever I send an update on Nela, they respond with such an enthusiasm that it makes me proud to share my daughter with them.”

NEWS: Dr. Schwartz and Dr. Greenfield have released a textbook focused on the use of complex endoscopic procedures in children. See more about Pediatric Endoscopic Endonasal Skull Base Surgery