“We Have Our Daughter Back!”

Ashleigh and Patrick Kennedy spent four years trying to find out why their little girl was so sick. She was already being treated for a blood disorder, but doctors said her headaches were not related to that. Her eventual diagnosis and treatment for Chiari gave the Kennedys back an active, happy child. Here, Ashleigh tells the story of how Chiari surgery changed their lives.

My daughter Kasey was just four years old when she started to show unusual symptoms – nosebleeds, headaches, frequent and easy bruising. It took nearly four years of testing, at some of the best-known medical centers in New Jersey, for Kasey to be diagnosed with the blood disorders known as Henoch-Schönlein Purpura (HSP) and Idiopathic Thrombocytopenic Purpura (ITP).

Even with the HSP and ITP under control, however, Kasey continued to complain of headaches. She was always a very social little girl, and it was heartbreaking to have her ask us why she wasn’t able to do all the things other kids could do. Anything that required good balance or dexterity, or good memorization skills, seemed beyond Kasey’s ability. She missed a lot of second grade due to her pain, and my husband and I missed a lot of work when Kasey couldn’t go to school or was sent home sick. We were always cancelling plans at the last minute, telling friends and family that “Kasey’s not feeling well.” People were surely starting to think we were just using that as an excuse!

Then one day toward the end of second grade, in June 2013, Kasey’s teacher called us. One of the classroom activities had been to draw a copy of an image, and around every one of Kasey’s drawings was a rainbow halo, with floating black spots on the paper. The teacher suggested we take Kasey to an eye doctor immediately.  We did — and after a two-hour visit the eye doctor sent us to the emergency room.

A neurologist there said Kasey should have further testing, but it didn’t need to be done immediately. He said we should first spend a week or so keeping a journal of Kasey’s symptoms. Charting her daily activities and symptoms made us realize she was in near-constant pain (headaches, stomachaches, and pain in her legs and her right arm).  When we saw the neurologist later in June and told him about the worsening headaches and weakness in her right side, he ordered an MRI and a MRA. We had the tests done, then did not hear from the neurologist for two weeks. Those were probably the longest, scariest two weeks of our lives, since we were seeing Kasey get worse every day. 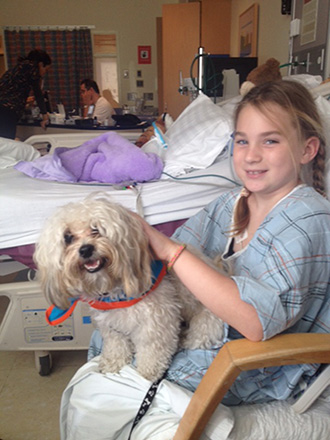 Kasey had a well visit scheduled with her pediatrician before we heard back from the neurologist. It was the pediatrician who gave us the MRI and MRA results — Kasey had a type I Chiari malformation — and she asked us what our plan was. We didn’t have a plan — this was the first we’d heard of it!  The pediatrician recommended that we see a neurologist or neurosurgeon who specializes in Chiari, gave us a not-very-long list of physicians nearby, and put us in contact with a local Chiari support group.

We had never heard of Chiari before. My husband scoured the Internet to find out anything and everything he could, and to find the best doctor for Kasey. He was especially worried about surgery, since she was still being treated for ITP and HSP.  I reached out to the Chiari support group, where a gentleman named Brian Murphy told me about Weill Cornell and Dr. Greenfield. Brian raved about Dr. Greenfield and reassured me he was not a “cut open right away” surgeon, which put my husband at ease.

From the moment I first called Dr. Greenfield’s office I knew it was the right place for us. His staff was so kind as I sobbed on the phone, and they reassured me that everything would be okay. They even had Dr. Greenfield’s nurse practitioner, Ashley, call me right after I hung up from making the appointment, just to talk to me.

When we met with Dr. Greenfield I could tell he was not in a rush to operate on Kasey. He ordered a sleep study and suggested watching her closely over the next few months.  He was so kind, and extremely patient and smart. He did not rush us — he sat with us and he really connected with Kasey. He spoke to her directly, not through me. This was the first time a doctor had ever done that, and it gave me a whole new perspective on what Kasey was going through. As much as it broke my heart to hear her talk about her suffering, I was at peace seeing her so comfortable with Dr. Greenfield.

Over the next few months Kasey’s symptoms progressed. She began wetting her bed and she was always exhausted. She would come home from school crying that her head hurt so much she would throw up.  We could see how her right leg was dragging and her right arm just hanging, and on her worst days the right side of her face would droop. The sleep study showed she had sleep apnea, which is another symptom of Chiari. By fall we were back in the city to meet with Dr. Greenfield again. 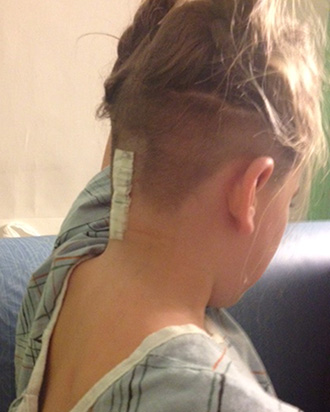 After examining Kasey again, and having seen the results of the sleep study, Dr. Greenfield said Kasey was now a candidate for decompression surgery. He sat and explained EVERYTHING (the good and bad) about the surgery, and he advised me to go home and talk it over with Patrick. He was very calm, and he spoke in terms Kasey and I could understand. He showed us photos, and he didn’t seem to be in a rush to move on to the next patient. He actually made us feel like we were the only ones in his office.

My husband and I spoke about the choices we had, but two days later we were back in the ER with Kasey, who had a terrible migraine and a nosebleed I couldn’t stop this time. That’s when we decided we needed to move forward with the surgery. It was so much easier to make the decision knowing Dr. Greenfield was going to be doing the procedure.

I could barely hear what people were saying the morning of the surgery — it sounded like everyone was under water.  But once Dr. Greenfield came to get Kasey I felt a sense of peace.  He gave me a hug and said “Don’t worry, I’ll have your little girl back to you even better than before.”  I cried the whole way back to the recovery room, but they were happy tears.  After four years of trying to find someone who understood what we were going through, and who could help Kasey, we had finally found that person in Dr. Greenfield.

The next few days in the PICU were hard, but the nursing staff was amazing. There were numerous residents and physicians who came to check on Kasey, but they all knew her story so we didn’t have to answer the same questions over and over. Everyone was concerned for us, keeping us comfortable, making sure we got the breaks we needed, making sure Kasey was okay. 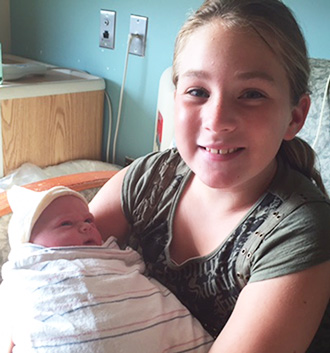 A year later, it’s amazing how much Kasey has changed. She has grown into a new person — much more confident in her schoolwork, more active, with better social skills.  Her headaches still come and go, but nothing like they used to be. Her nosebleeds have stopped, she can get a solid night’s sleep, and she runs around without reservation every day.  We finally have the daughter we were always meant to have. And it is all because of Dr. Greenfield and his team!

When I speak to other parents of children with Chiari, I recommend Dr. Greenfield and the Weill Cornell Brain and Spine Center every time. I do not hide the fact that the procedure can be risky, and that surgery is not for everyone. But I tell them to listen to their heart.  I know every case is different, but I am sure that the quality of care would not be different.

Only a parent knows what is best for their individual child. But having a medical team so tuned in to that, a team that focuses on doing the right thing for each individual patient, makes the decision much easier.  The treatment and support we received, from the front desk and the nurses and, of course, from Ashley and Dr. Greenfield, were always top notch. They were always there for us.