“It’s the little things that really matter,” says Katina Ansen. “Filing my nails, or using one hand to hold a pot handle while turning the spatula with the other – it’s the things you don’t even think of!” For someone with essential tremor, however, those little things are everyday challenges, even if the tremor is only on one side. Thanks to Dr. Michael Kaplitt and a new clinical trial of a second focused ultrasound treatment for patients already treated on one side, Katina now has full use of both of her hands. “It’s a life-changer!” she exclaims.

In 2017, Katina was among the first patients treated after the FDA approved the use of high-intensity focused ultrasound (HI-FU) for essential tremor. (Read about her first experience here.) She was thrilled with the results, and she says that from the time of the first treatment she was champing at the bit for the second. But the FDA had approved HI-FU for use on one side of the brain only, cautiously awaiting long-term results before allowing treatment on the second side.

Katina had stayed in touch with Dr. Kaplitt since her first treatment, and not just to let him know how well she was doing. She was also eager for news about when she might be able to have the procedure on the other side. In early 2020, Dr. Kaplitt called with the news she’d been waiting for. The FDA had approved a new clinical trial for the Bilateral Treatment of Medication Refractory Essential Tremor, for those who had previously undergone HI-FU treatment without adverse effects, and he would soon be enrolling patients. Was Katina still interested?

“I jumped at the chance!” she exclaims. 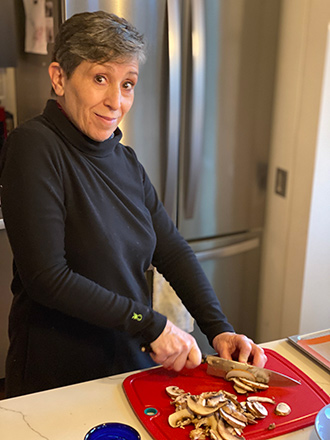 Katina Ansen cooking (with both hands!) after her second procedure

A lot had changed for Katina in the three years since her first procedure. She and her husband had moved to Madison, Wisconsin, to be near their daughter and new grandchild, but the pandemic had made it difficult to forge new ties in their community. Getting that call from Dr. Kaplitt was a welcome relief, and Katina didn’t hesitate to schedule her trip to New York.

Of course, travel during the pandemic summer of 2020 was complicated to say the least. The very day after Katina flew to New York, flights from Wisconsin were temporarily prohibited. Katina’s stay in New York was punctuated with Covid-19 testing, temperature checks, and temporary isolation.

It was all worth it. “It went swimmingly!” says Katina of the second procedure. “It’s been great – it’s like magic! Now it’s the tremor I never think of. I can cook, I can do everything. All those years of having the tremor, I adapted, but now I don’t have to adapt anymore.”

Best of all, Katina is still creating her art. “I just finished one commissioned piece, and I’m working on another assignment,” she says. “I do yoga three times a week, and I babysit for my grandson three days a week. Covid knocked me for a loop, as it did everyone, but I’m so happy. The focused ultrasound treatment is a life-changer, and I can’t commend Dr. Kaplitt and his team enough.”

March 2021: Dr. Kaplitt is currently enrolling previously treated patients in the new study. To see if you qualify for the trial, call his office at 212-746-4966.